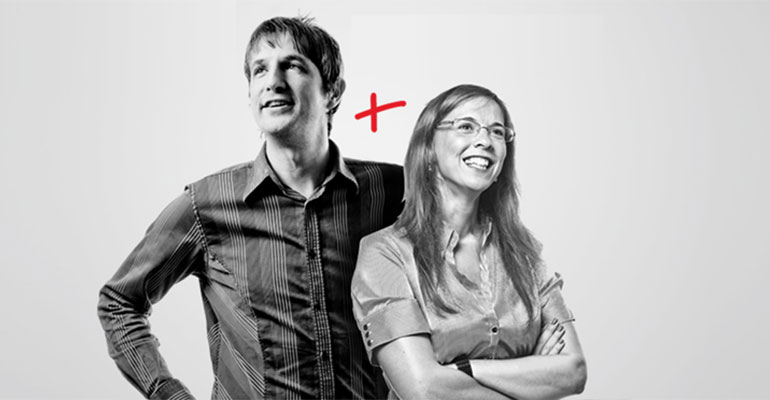 Australian companies could face a problem, if you believe that acceptance of BYOD adds to a company’s productivity. That’s certainly the view of in many high growth emerging economies, who are embracing BYOD in a far bigger way than here, or in most mature markets.

It’s the surprising finding from an Ovum report, commissioned by Logicalis, that looked at how employee attitudes to work/life balance drove BYOD behaviour. Over 3,750 people were surveyed in 17 different countries – enough to show significant variations in attitudes to work and the devices we use.

Mature markets and the work-life divide

Many Australians like to keep their home life and work life separate. Only half the Australians surveyed surveyed agreed with the statement: “Being able to access corporate emails and other business apps outside official working hours enables me to do my job better.” It’s a similar response in most other developed economies.

In India it’s a very different story; more than 90% agreed with the statement. And the figure isn’t much lower in all the other emerging markets surveyed. It seems the eagerness to get ahead makes these people more willing to blur the lines between work and personal life.

The survey showed that BYOD adoption in Australia is relatively low – about 40%. As you can see in the chart, that’s just a little below the average for mature markets. But the average in growth markets is markedly high, exceeding 80% in several cases. It seems in this eagerness to get ahead, many people are insisting on BYOD to increase their working time. 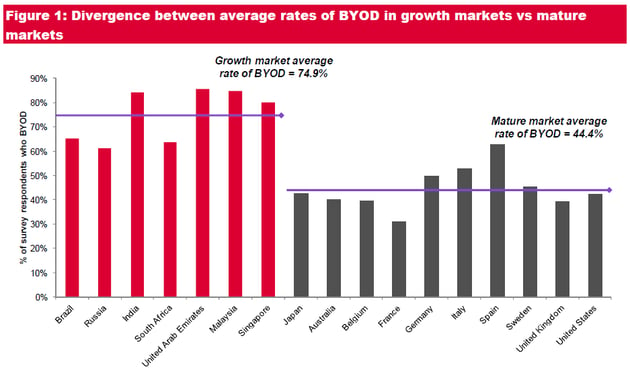 Whilst employees in emerging markets share a common desire to use BYO devices, the companies they work for have mixed attitudes. In Russia, for example, 70% of the IT departments either don’t know about it or ignore that it’s happening. Yet in Brazil, Singapore and South Africa more than half the companies encourage the use of BYOD.

The responses are equally as diverse in developed economies. In Australia, 60 % of companies say they encourage the use of BYOD. It’s higher still in the United States.

So, to an extent, we have countries like Australia where companies seem more willing to embrace the shift than the people who work there, whilst in many emerging nations demand is high but many employers have their head in the sand.

Whilst, on the surface, it looks like Australia is facing a challenge from emerging markets eager to use BYOD to improve productivity, there’s a different story sitting behind these figures.

As we’ve seen, we have companies ready and willing to embrace BYOD, supported by management policies. If companies want to compromise their attitude towards work-life balance the capability exists. Elsewhere, in emerging economies, people want to use BYOD, often unsupported by their companies.

Herein lies a major risk. A badly implemented BYOD policy can have catastrophic consequences; something that’s recognised as a concern by many respondents. More than 80% of those who used their own devices in India, UAE, Malaysia and Singapore, for example, said that lack of BYOD management was an issue. In Australia and the US it’s about half that number.

So, ultimately it becomes a question of philosophy. Is BYOD a good idea in terms of how you work? Many Australians think not. But if and when they realise the need to change, their employers will probably have a solution. Our real challenge is less to do with technology and more to do with how we adapt our work mentality to competitive pressures from overseas.