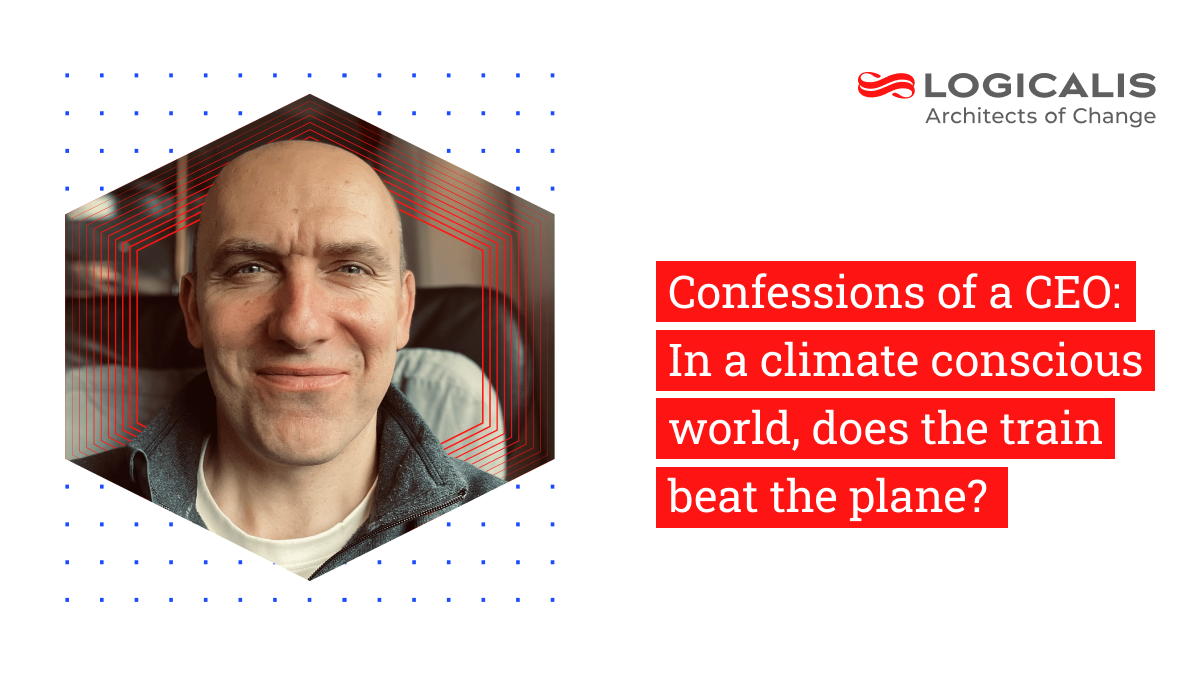 Confessions of a CEO - climate travel blog from Bob

Confessions of a CEO:

In a climate conscious world, does the train beat the plane?

More and more climate-conscious travellers are opting to take the train instead of flying. With this in mind, and a business meeting coming up in Cologne, I decided to take the 580km trip by train.

Why? Logicalis is in the middle of its own journey towards becoming carbon neutral and I wanted to test three things:

You probably have your own thoughts on the answers to these questions. Why not take a guess and compare to my estimated answers at the end of this blog?

A long but productive journey to Cologne

My journey started at 8am with a short drive to my local train station followed by a one-hour train and tube trip to London St Pancras. After a 2 hour wait at St Pancras, I was on the Eurostar to Brussels.

One big advantage of the train was the ability to work uninterrupted and, with a secure network connection (my laptop was tethered to my work-provided mobile wifi), this worked perfectly. I was the very picture of a modern mobile employee!

Once in Brussels, I had to wait another 90 minutes for my connecting train to Cologne. This gave me the opportunity to get some lunch and make a few calls. The journey to Cologne took another 2 hours, and again I was able to work easily and securely, so no time was wasted. Once in Cologne I had a short walk to my hotel.  ‘Door to door’ this trip took approximately 9 hours.

I’ve compared this to a typical flight journey to the same destination. This would involve driving to London Heathrow, arriving 2 hours before departure, a 90-minute flight, an estimated 60 minutes to disembark and exit the airport in Dusseldorf, followed by a taxi to my hotel in Cologne.

All in, the train journey took 3 hours (or 50%) longer, than the flight. This sounds like a long time but the reality was that I got through much more work than I would have done taking a flight. So yes, it took longer, but my productivity was much higher.

Did you think that flights are much cheaper?

To be honest, I assumed the flight would be much cheaper. The reality was that the train journey turned out to be around £90 cheaper! I was amazed by this. I wonder if cheap air travel is now a thing of the past?

Note that I included the approximate costs of travelling by car to the train station/airport, the cost of parking at those locations and the estimated cost of taxis to get me to my hotel in addition to the cost of the main mode of transport. I also kept the classes of travel consistent to make sure I wasn’t duping myself!

It turns out that, yes, it is obvious! Travelling by train produces a much lower carbon footprint than the equivalent flight. By my estimates, the flight journey produced 70kgs more CO2 than the train, which is more than 3 times the carbon emissions. There are various carbon calculators on the internet but I used a variety of sources to come up with my calculations, including www.icao.int, www.carbonfootprint.com and www.lner.co.uk.

I’m sure any expert would find flaws in my calculations, but I believe the broad conclusion will still hold water. Yes, public transport will generally take longer. However, it can be cheaper, more environmentally friendly and much, much more productive.

This trip has certainly made me think twice about my carbon footprint and I’ll definitely investigate this type of travel option for future business trips.