Cisco’s third annual Global Cloud Index (GCI) forecast released some astounding findings recently. Most notably is the projection that global cloud traffic will grow 4.5 fold from 2012 to 2017, whilst global data centre is expected to grow threefold over the same period.

Cisco gives context to help us understand the magnitude of these numbers and state that 7.7 zettabytes is equivalent to 107 trillion hours of streaming music, which is about 1.5 years of continuous music streaming for the world’s population in 2017. 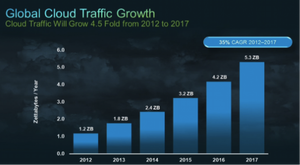 As data centre traffic continues to grow, the underlying infrastructure supporting traffic growth or workload will inevitably keep growing. Cisco forecasts that from 2102 to 2017, data centre workloads will grow 2.3 fold.

What will drive this increase in cloud traffic over the next four years?

Cisco reveals that businesses continue to have privacy and security concerns and therefore still hesitate to make the transition to the cloud. Despite this, businesses all over the world are seeing the economies of scale that virtualisation and cloud computing brings to enterprises and service providers. In fact, it is projected that cloud traffic generated by businesses will grow at a healthy rate – 31% CAGR – just behind the rate at which consumer-based cloud traffic will grow.

Essentially, Cisco’s forecasts indicate that the era of cloud domination has begun. Even though it is currently driven and dominated by consumers, it is inevitable that the business world will soon follow suit. According to Thomas Barnett Jr., Director of Service Provider Thought Leadership, this is because “cloud data centres offer increased performance, higher capacity and ease of management, while virtualisation serves as a major catalyst in enabling hardware and software’ consolidation, greater automation and an integrated security approach”.

Ultimately, as more CIOs gain a deeper understanding of cloud solutions and the benefits it can bring to a business through its elastic and scalable provisioning, usage-based pricing and on-demand delivery, more businesses will forego traditional data centres in favour of cloud-based solutions.